On July 29, 1858, two steam-powered battleships met in the middle of the Atlantic Ocean. There, they connected two ends of a 4,000 kilometer (2,500 mile) long, 1.5 centimeter (0.6 inch) wide cable , linking for the first time the European and North American continents by telegraph. 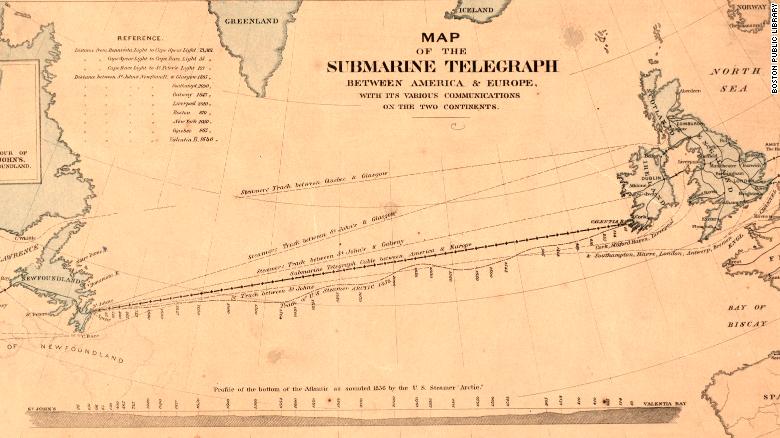 Just over two weeks later, the UK’s Queen Victoria sent a congratulatory message  to then US President James Buchanan, which was followed by a parade through the streets of New York, featuring a replica of a ship which helped lay the cable and fireworks over City Hall.
In their inaugural cables, Queen Victoria hailed the “great international work” by the two countries, the culmination of almost two decades of effort, while Buchanan lauded a “triumph more glorious, because far more useful to mankind, than was ever won by conqueror on the field of battle.
The message took over 17 hours to deliver, at 2 minutes and 5 seconds per letter by Morse code, and the cable operated for less than a month due to a variety of technical failures, but a global communications revolution had begun.
By 1866, new cables were transmitting 6 to 8 words a minute, which would rise to more than 40 words before the end of the century. In 1956, Transatlantic No. 1 (TAT-1), the first underwater telephone cable, was laid, and by 1988, TAT-8 was transmitting 280 megabytes per second — about 15 times the speed of an average  US household internet connection — over fiber optics, which use light to transmit data at breakneck speeds.
In 2018, the Marea cable  began operating between Bilbao, Spain, and the US state of Virginia, with transmission speeds of up to 160 terabits per second — 16 million times faster than the average home internet connection.
Today, there are around 380 underwater cables in operation around the world, spanning a length of over 1.2 million kilometers (745,645 miles).
Underwater cables are the invisible force driving the modern internet, with many in recent years being funded by internet giants such as Facebook, Google, Microsoft and Amazon. They carry almost all  our communications and yet — in a world of wireless networking and smartphones — we are barely aware that they exist.
Yet as the internet has become more mobile and wireless, the amount of data traveling across undersea cables has increased exponentially.
“Most people are absolutely amazed” by the degree to which the internet is still cable-based, said Byron Clatterbuck, chief executive of Seacom, a multinational telecommunications firm responsible for laying many of the undersea cables connecting Africa to the rest of the world.
“People are so mobile and always looking for Wi-Fi,” he said. “They don’t think about it, they don’t understand the workings of this massive mesh of cables working together.
“They only notice when it’s cut.”
In 2012, Hurricane Sandy  slammed into the US East Coast, causing an estimated $71 billion in damage and knocking out several key exchanges where undersea cables linked North America and Europe.
“It was a major disruption,” Frank Rey, director of global network strategy for Microsoft’s Cloud Infrastructure and Operations division, said in a statement.
“The entire network between North America and Europe was isolated for a number of hours. For us, the storm brought to light a potential challenge in the consolidation of transatlantic cables that all landed in New York and New Jersey.”
For its newest cable, Marea, Microsoft chose to base its US operation further down the coast in Virginia, away from the cluster of cables to minimize disruption should another massive storm hit New York.
But most often when a cable goes down nature is not to blame. There are about 200 such failures each year and the vast majority are caused by humans.
“Two-thirds of cable failures are caused by accidental human activities, fishing nets and trawling and also ships’ anchors,” said Tim Stronge, vice-president of research at  TeleGeography, a telecoms market research firm. “The next largest category is natural disaster, mother nature — sometimes earthquakes but also underwater landslides.”
A magnitude-7.0 earthquake off the southwest coast off Taiwan in 2006, along with aftershocks, cut eight submarine cables which caused internet outages and disruption in Taiwan, Hong Kong, China, Japan, Korea and the Philippines.
Stronge said the reason most people are not aware of these failures is because the whole industry is designed with it in mind. Companies that rely heavily on undersea cables spread their data across multiple routes, so that if one goes down, customers are not cut off. 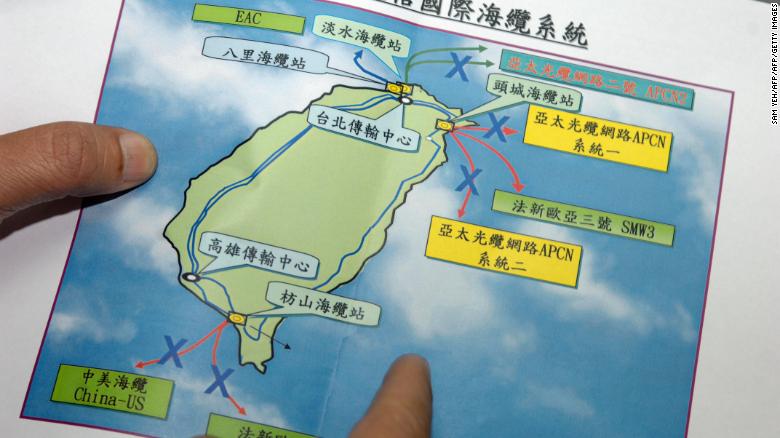 Laying a cable is a years-long process which costs millions of dollars, said Seacom’s Clatterbuck.
The process begins by looking at naval charts to plot the best route. Cables are safest in deep water where they can rest on a relatively flat seabed, and won’t rub against rocks or be at risk of other disturbances.
“The deeper the better,” Clatterbuck said. “When you can lay the cable down in deep water you rarely have any problems. It goes down on the bottom of the seabed and just stays there.”
Things become more difficult the closer you get to shore. A cable that is only a few centimeters thick on the bottom of the ocean must be armored from its environment as reaches the landing station that links it with the country’s internet backbone.
“Imagine a long garden hose, inside of which are very small tubes that house a very, very thin fiber pair,” Clatterbuck said. That hose is wrapped in copper, which conducts the direct current that powers the cable and its repeaters, sometimes up to 10,000 volts.
“The fibers are wrapped in urethane and wrapped in copper and wrapped again in urethane,” he said. “If we’re going to have to put that cable on a shoreline that is very shallow and has a lot of rocks, you’re now going to have to armor coat that cable so no one can hack through it.”
Cables in less hospitable areas can be far thicker than garden hoses, wrapped in extra plastic, kevlar armor plating, and stainless steel to ensure they can’t be broken.
Depending on the coast, cable companies might also have to build concrete trenches far out to sea, to tuck the cable in to protect it from being bashed against rocks.
“Before the cable-laying vessels go out they send out another specialized ship that maps the sea floor in the area when they want to go,” said TeleGeography’s Stronge. “They want to avoid areas where there’s a lot of undersea currents, certainly want to avoid volcanic areas, and avoid a lot of elevation change on the sea floor.”
Once the route is plotted and checked, and the shore connections are secure, huge cable laying ships begin passing out the equipment.
“Imagine spools of spools of garden hose along with a lot of these repeaters the size of an old travel trunk,” Clatterbuck said. “Sometimes it can take a month to load the cable onto a ship.”
The 6,600 kilometer (4,000 mile) Marea cable weighs over 4.6 million kilograms (10.2 million pounds), or the equivalent of 34 blue whales, according to Microsoft, which co-funded the project with Facebook.
It took more than two years to lay the entire thing. 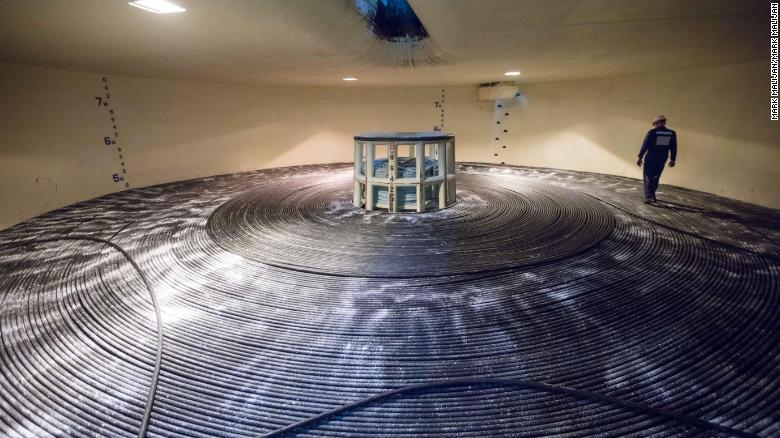 Jessica Korda wins Tournament of Champions in Florida after play-off

Artificial intellingence into stores at Mark&Spencer

Nintendo Returns to VR With $40 Headset

April 12, 2019
We use cookies and similar methods to recognize visitors and remember their preferences. We also use them to measure ad campaign effectiveness, target ads and analyze site traffic. To learn more about these methods, including how to disable them, view our Cookie Policy. Starting on July 20, 2020 we will show you ads we think are relevant to your interests, based on the kinds of content you access in our Services. You can object. For more info, see our privacy policy. By tapping ‘accept,‘ you consent to the use of these methods by us and third parties. You can always change your tracker preferences by visiting our Cookie Policy.OkPrivacy policy