It has been described as the “Hollywood” of horses, and it’s certainly a winner in the glamor stakes. But Qatar’s Al Shagab  is more of a seven-star equine resort than a make-believe movie set.

The multi-million-dollar center on the outskirts of the capital Doha is Qatar’s luxury launchpad into equine excellence, from elite show jumpers to Arabian show horses and endurance racers. It is also helping to spawn the highly successful thoroughbred horse racing operation now predominantly based in France under the same name.
The stunning complex has been built in the shape of a horseshoe around an old Ottoman stable and fort. It serves to promote both Qatar’s rich heritage with Arabian horses, and set the “highest standards in horse welfare, breeding, equine education and research,” according to its website.
The facilities include a breeding center and stabling for more than 400 horses, a state-of-the-art equine hospital, indoor and outdoor performance arenas as well as an air-conditioned hydrotherapy and exercise unit complete with walking carousel, a circular swimming pool akin to a lazy river and a therapeutic spray bath like an equine Jacuzzi. Huge heat lamps dry the horses after their dips.
The horses are exercised every day at 6 a.m. and again after 4 p.m. when temperatures begin to drop. It is a life lived in luxury where the horses are trained with technological expertise akin to that used for Premier League footballers or high-profile Olympic athletes.
“One of the riders here calls it the Hollywood of the equine world,” says Abdul Rashid Mordiffi, who runs the commercial side of the operation. “I don’t believe there is another facility like it anywhere else in the world.”
Arriving at the 10 million square-foot venue mid-morning, the place is virtually deserted, the baking sun and 100-degree heat forcing horses and the 200-plus workforce indoors.
At its heart are the sleek white curves of the performance center, with outdoor and undercover arenas for when it gets too hot. 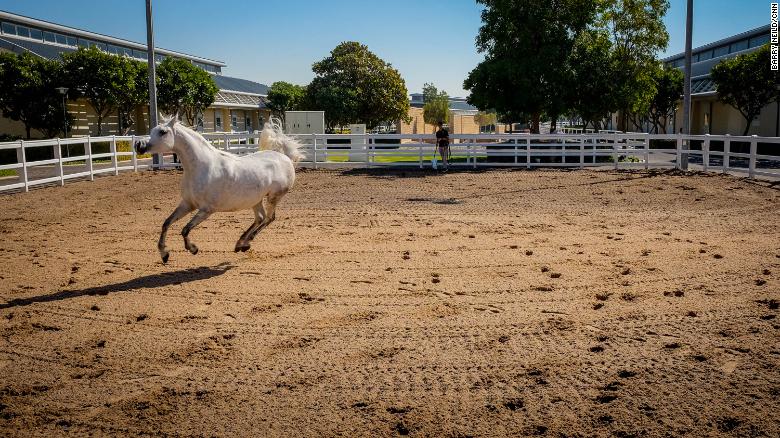 “[It’s] the largest anywhere in the world at 6,000-square meters (64,500 square feet),” according to Mordiffi, the grandson of a farrier, who hails from Singapore originally.
The arena, which hosts the Qatar leg of the prestigious Longines Global Champions Tour
show jumping circuit, has a private suite reserved for the royal family, fitting as it was former Emir Sheikh Hamad bin Khalifa al Thani, who launched Al Shaqab on the site of a former battleground in 1992.
Long before natural gas or oil came to prominence in Qatar and made Al Thani’s ancestors wealthy following their move from the inhospitable desert, the area was best known for its prized Arabian horses, which played a key role in daily life.
For Al Thani, the aim of Al Shaqab was simple: “Progress and development of modern-day Qatar will reflect, in particular, efforts to maintain the heritage of our forefathers through the noble Arabian horse.”
Designed by Hong Kong-based Leigh & Orange architects, the project was completed in 2014, although further schemes are planned as it pushes towards its boundary which includes on one side a golf course and on the other one of the stadiums for the 2022 FIFA World Cup.
Because of the heat, organized tours of the vast complex are conducted in golf buggies or luxury cars.
To the east is the equine exercise center where two Arabians are brought out. Mordiffi describes the Arabians as having a “narrow snout, large nostrils, concave face, ears like an elf, and when they run the tail goes up which doesn’t happen with other horses.”
For the most part, they generally hail from just one horse Ansata Halim Shah, his offspring now spawning into a fourth generation.
One is put slowly through the carousel before being placed on a treadmill with a steep gradient to replicate the cross-country terrain it will cover in endurance races of up to 120 miles.
Another horse is led quite happily into the pool where it begins to swim. In training, they can do anything up to 10 laps at a time before a visit to the equine Jacuzzi, all the exercise aimed at reducing potential injury.
The stables housing the Emir’s horses are the quintessence of luxury. The Arabians, disinterested in visitors with food having just been served, each have a spacious stable.
Even the amount of water they drink is registered on a LCD display on the front of the stall front.
Al Shaqab’s breeding operation accounts for 100 to 150 foals born on site annually, all of which are treated at its veterinary medical center. The hope is for the hub to be the epicenter of equine care for the entire region, pending the lifting of the sanctions by Qatar’s neighbors.
Doctor Camilla Anne Jamieson has been working at Al Shaqab since June last year having previously worked in Texas. She is one of three specialists; there are also three surgeons.
The facilities are cutting edge. There are MRI and CT scanners, X-rays, two operating theaters, stables akin to hospital beds, and an ever-expanding research wing to the facility. It is the Aladdin’s Cave of veterinary equine medicine.
“This is on a par with the very best equine hospitals in the world,” she said. “And this is just the beginning. It’s actually pretty incredible.”
At the time of visiting the veterinary unit, whose staff hails from 35 different countries, a nurse is checking one pregnant mare, while another horse is attached to a drip after surgery for colic.
There is also a massive education center at the heart of the operation and a facility where equine therapy is offered for autistic children.
There is a collaborative feel with horses coming from all over Qatar. Horses are regularly gifted to other breeders from Al Shaqab, the aim simple — to spread the breed of Arabian horses.
The impact has already been felt since its opening with Qatar and Al Shaqab an increasing global player in the equine world.

There’s no vaccine for the infodemic – so how can we combat the virus of misinformation?

The bridge in Chirajara collapsed

How does Europe compare with the US on gun ownership?

ABOUT US
Globetelegraph is your news, entertainment, music fashion website. We provide you with the latest breaking news and videos straight from the entertainment industry.
Contact us: contact@yoursite.com
FOLLOW US
© Globetelegraph.com 2020
We use cookies and similar methods to recognize visitors and remember their preferences. We also use them to measure ad campaign effectiveness, target ads and analyze site traffic. To learn more about these methods, including how to disable them, view our Cookie Policy. Starting on July 20, 2020 we will show you ads we think are relevant to your interests, based on the kinds of content you access in our Services. You can object. For more info, see our privacy policy. By tapping ‘accept,‘ you consent to the use of these methods by us and third parties. You can always change your tracker preferences by visiting our Cookie Policy.OkPrivacy policy